…a story that is magical from the beginning even as the reality of the setting and situation are really part of the strength here. What’s striking is that the world is developed and realized but that it also seems a place where things are possible and where things connect…the narrative is developed lovingly and warmly. Chapter 17 opens with a typically developed scene where the reader is able to picture and experience the full richness of a specific scene.–Judge, 2nd Annual Writer’s Digest Self-Published eBook Award (Threads) 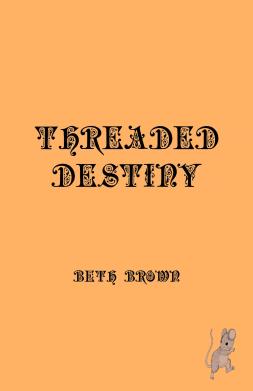 Ellis thought her parents died in an accident ten years ago. When she learns that they disappeared on an unknown timeline and can’t find their way back Ellis forces past her shy, reserved self to go look for them. But as Ellis uses the device her parents invented to unravel the mystery behind their disappearance, she unexpectedly learns about life’s fragile path and the necessity of choosing one’s destination — a destination that may depend on a thread.

The family could have been any ordinary family just out for a walk in the park before stopping by the bookstore. It was a beautiful June day. The azure sky was spotless. The man and woman were casually dressed, wore comfortable walking shoes, and carried little with them aside from a small object in the grip of the man’s hand. The girl between them looked to be a young teenager. She wore a serious, yet excited expression — the look of someone who was about to experience a rite of passage.

Together, man, woman, and girl walked to the back of the bookstore where they huddled closely, joining free hands. As the father extended his clutch in front of them, the mother turned her head for a fleeting look to the front of the store. A contented smile formed on her face just as the three of them faded from sight with less than a whisper.

Four-year-old Ellis sat with extended legs on the soft chenille braided rug amidst a half dozen books scattered about her feet. Her neck rounded, she gazed intently into the brightly colored book that lie open on her lap, her small chubby hands holding onto either side of it. Stretched out on the rug not far from her was a yellow Labrador retriever puppy, sleeping after a morning of play. The puppy’s soft snoring was no distraction to the little girl and was all that she heard.

Nearby, another young teenager, resembling a miniature shopkeeper — her hair in a bun — was looking after Ellis. When less than a minute had passed, the young shopkeeper’s expression changed from that of excitement to alarm and she ran from the girl and dog to find her parents.

This site uses Akismet to reduce spam. Learn how your comment data is processed.